Welcome to CrankyYankeeFan.com, a window into the rivalry of the Yanks and Sox and its impact on the lives of the fans. I'm the author, Jay, and I hope you enjoy the site.


In 2006, I was one of seven college students in the nation to be named a Jim Murray Memorial Foundation scholar, awarded in memory of the late founding writer of Sports Illustrated and Baseball Hall of Famer. I followed my passion to ESPN in 2008, where I interned while writing my senior thesis at Trinity College on the evolution of baseball in 20th century American literature.

Currently, I live in Back Bay, within sight of enemy baseball ground zero, Fenway Park. 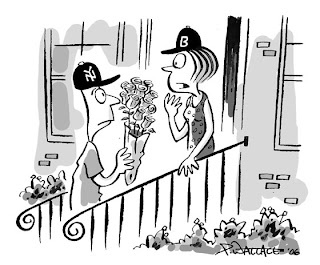 How It All Began
I grew up in southern Connecticut - "NewYorkachusetts" - where the line between New York and Boston fans blurs.
A basketball fan and player, I grew up rooting for my father's team, the Knicks. One fateful day, I happened upon the Yankees, who shared the airwaves on the MSG Network with the Knicks at the time. The rest, I thought, would be history - until the Sox rewrote it by breaking the Curse in 2004.
After reveling in the Tino Martinez/Paul O'Neill era, I attended Trinity College in Hartford as the Yanks started losing their stranglehold over baseball. I moved to Boston in the fall of 2008 as an endangered species: a Yankees fan in Beantown.
Where It's All Going
This blog is for those who understand, appreciate, and thirst for that feeling you get when walking up the ramp at the ballpark to see the clean, freshly cut green of the field stretching before you. It's for anyone who loves the Yankees, Red Sox, New York, Boston, baseball, and rivalries.
My hope is that this blog is for you. If it is, share the link with your network of fans, or follow the blog on Facebook and Twitter.