If, as the cliche runs, baseball is a business, then no one has managed their brand better than the Yankees and Red Sox. Globally, the interlocking NY and the red B represent one thing above all else: winning. The rest is all just a domino effect.

Just ask Billy Martin, who knows his way around victories with five titles as the Yanks skipper: "What I miss when I'm away is the pride in baseball. Especially the pride of being on a team that wins."


What this doesn't reveal is the idea of becoming a true Yankee, a true Red Sock, and inevitably becoming a true member of this great rivalry. Winning is essential in that too, but it can't quite be put to stats.


Look no further than A-Rod. Since he arrived in 2005, he's averaged a .299 BA, just under 40 HR, 119 RBI, and 20 SB per season. He appeared on five All Star teams while winning two MVPs and three Silver Sluggers - all while adjusting to a new position.


But none of that mattered.

He needed a postseason where he hit .365, slugged .808, homered six times, and delivered multiple clutch hits to cement himself as a true Yankee and a truly relevant member of the rivalry rather than a bone of contention and a footnote.


On the Boston side, let's compare the Red Sox career stats of two players, only one of which will be remembered in rivalry lore:


Player A is Jason Bay. Player B is Dave Roberts.


Now, I'm no fool - I know that someone of Bay's caliber would be a revered Sox icon had he stayed and won multiple championships. But the fact is, he didn't, so he's expendable when we talk Sox-Yanks. Mo Vaughn was an all-time Sox great at first base, but Kevin Youkilis has been great and has won - so Vaughn is much more expendable while Youkilis will be on the fans' radar in every rivalry debate.


What this means for fans is the following: you honor great players who win, love role players who care, banish All Stars that fold in October, and above all else, you never, ever, under any circumstances, change your shirt or seat on the couch when your team is winning.

Yankees/Red Sox Rivalry Commandments
1. Thou shalt choose a side. Forever.
2. Thou shalt not accept bandwagon fans.
3. I am your announcer. You shall have no other announcers before me.
4. Honor thy baseball forefathers.
5. Keep holy Opening Day.
6. Thou shalt hate the jersey.
1 comment:

There's nothing worse than being forced to listen to announcers you can't stand, especially in a sport with as much time for banter as baseball. (After all, actively choosing to listen to broadcasters aside from your own team's violates the rivalry's Third Commandment.)
When I decided to spend the weekend at home in Connecticut, I'd say 50% of the draw was hearing the YES Network announcers broadcast the Yanks/Sox game on Saturday. (The other 50%? Mother's Day. Does that make me a bad son? She's a Yanks fan too...she'd understand...)
So half of me completely panicked when I learned that FOX was carrying the game. The other half knew the team of Joe Buck, Tim McCarver and sideline reporter Ken Rosenthal provides at least 20 minutes of pure, unadulterated, miraculous (unintentional) announcing comedy. 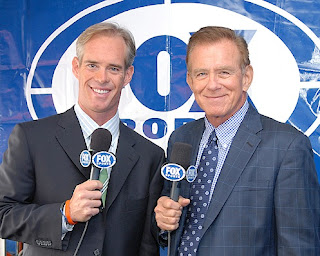 I was not disappointed. Ladies and gentlemen, I give you the FOX Saturday Baseball announcers:
SCENE: Midway through an inning, the FOX cameras focus on a group of pigeons pecking the dirt of the left field warning track.
Joe Buck: And a group of pigeons decide to land on the field.
Tim McCarver: One thing that reminds me of (pause), speaking of birds (a greater segue was never uttered), is how Yanks pitching coach Kevin Long has worked with [Yanks right fielder Nick] Swisher to keep his head still [while batting].
(Come again, Timmy? A little more context, perhaps?)
JB: I said "pigeons". I'm told they're actually doves.
TM: Well, Kevin Long needs to work with those doves to keep their heads still.
(Still waiting on that explanation, Tim!)
JB: We'll need to check for the plural of "dove."
TM: I think "dove" is the plural of "dove."
(FOX continues to rotate camera shots between the game and the pigeon-doves. I hate when baseball gets in the way of a good bird conversation, especially at a baseball stadium.)
(Joe Buck asks for sideline reporter Ken Rosenthal's input. Good idea, Joe - he's closer to the field.)
KR: Guys, I'm going by the Prince song, "When Doves Cry."
TM, as if this is the most ridiculous thing he's ever heard: C'mon!
KR: Well, it's in the song title - doves, plural.
(I'm on the edge of my seat.)
JB: Did Ken Rosenthal, he of the (pause) print (pause) media, just refer to a Prince song to verify the answer for the plural of the word Dove? (pause) He's right. Prince was right. When in doubt, refer to Prince.
(Author: Rams seat through TV.) 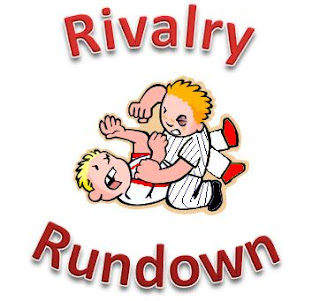 To prepare yourselves mentally for this weekend's clash between the Sox and Yanks:

Across the US, the Yankees and the Red Sox are both synonymous with winning. (The two teams have combined to win four of the last nine titles, to say nothing of their division and league success.)
They're also synonymous with baseball - all the history, all the current financial balance questions, and all the "cool" of donning those logos. You can't speak of sports or Major League Baseball in this country without bringing these two franchises into the conversation.
Yet abroad, the story is much different. Though the number of Sox fans has been growing by leaps and bounds since '04, the Yankees remain much more visible -- partly due to their baseball team and partly due to the popularity of that interlocking N-Y. Through international stars on and off the field (Jay-Z, Hideki Matsui, Mariano Rivera, etc.), international endorsements of all kinds (Derek Jeter and Gatorade or Nike's Jumpman apparel, to name two), and unbelievable feats on the field, the Yankees have reached international shores in every conceivable way.
While I was in Rome, I walked down Via del Corso, a packed street in the heart of the city renowned for its shopping and style. Consider it the Fifth Avenue of Rome. I was struck by how many Yanks hats walked past me -- many, it seemed, worn by locals.
In two weeks in Italy in Rome, Florence, Amalfi and Capri, I failed to see a single Sox hat. Coincidence? I'm sure it was. But the key point here is that I saw more Yanks hats 4,000 miles from New York than I do 300 miles away in Boston.
Take a look at this Google tool, called Insights for Search, which reveals the search volume on Google for various terms. In this case, when neither the Sox or Yanks win a title ('05, '06, and '08) the Yanks double the search volume of the Sox. Even in championship years for Boston, they only manage to surpass New York in the month of or following their victory.
An even closer look below the graph reveals that the Yanks far surpass the Sox in Google searches out of Rome and Milan, two of Italy's most developed and international cities.
But there's more. Take a look at the following countries too-
United Kingdom
France
Germany
Australia
Japan
Finally, take a look at the most popular MLB teams on Facebook and Twitter (both international sites launched in the US), and the numbers are quite staggering.
It's good being home in Boston, but in an altogether too strange way, I was even more at home in Rome.