The First Commandment of the Rivalry

The Big Umpire Upstairs made a call at the beginning of time (which for our purposes means 1903). As the New York Highlanders and Boston Pilgrims launched their rivalry, that call was for fans to choose a side and remain there, for all time.

As a Christian, I believe in Heaven and Hell. As a Yankees fan, I believe that in Hell, Sox and Yanks fans must co-exist, but in Heaven, you're with your side for all eternity.

You might say living in Boston can be hell for a Yankees fan, but I grew up in the only place in the world that attempts to straddle the border between Red Sox Nation and the Yankees Universe (thus breaking the First Commandment) - Connecticut. John Branch of the New York Times tries to define a Yankees/Red Sox border in this video.

As he says, "You can't be exactly on the border - [you] need to be on one side or the other." And the line he defines is fairly accurate based on my 22 years in the Nutmeg State. 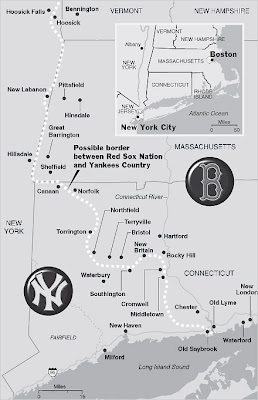 As the Commandment dictates: you choose your team, you love your team, and you never waver from that stance. It may sound obvious, but it sets the tone for the sports life of fans from New York or Boston forever.

It also sets the tone for the next nine Commandments...