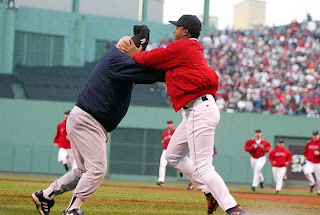 If extending an olive branch symbolizes the hope for peace, then what's the opposite gesture? I like to think that when I decided to move to Boston in August 2008 as a staunch Yankees fan, I lit that branch on fire and stuck it right into Beantown's hair.
Look, what would be the alternative? More importantly, what would any alternative have done to change anything?
The Sox and Yankees have a rivalry so deep and so hostile that any attempt on my part to be civil would have been meaningless. I'll be the first to admit - individual fans don't add or subtract much. We each throw no log on the fire. We're splinters tossed into a blaze the size of New York and New England. The perceptions are in place, the stories are written, and the sides are taken - regardless of the actions of one Yankees fan. But we're a part of something bigger, and so we fall into line: Yankees fans and Sox fans - roles that last longer than your marriage, your job or (as I discovered) your time living anywhere.
These two teams (and their fans) have clashed since 1903, when they were the Boston Pilgrims and New York Highlanders. (*See below for more details.)
So in the fall of 2008, I followed the Bombers on their roadtrip to Boston, several weeks before I was scheduled to move into Back Bay, and the questions started coming:
How do I convince Sox fans to let me live in peace? Do I buy pepper spray? A flak jacket? A Nationals hat?
Are there enough Manny jokes in the world to earn me a few friends in the area?
Should I keep Yankees fans strong in Boston by dating only my own kind, like some sort of Jewish system for baseball?
Will Sox fans let me pronounce my R's without stealing them for the words "idear" and "soder"? (Seriously??? It blows me away that it's "Fah to go to the bah for a beeah", but then they get a good "idear". It's wicked retahded.)
Despite the existential and grammatical hurdles I needed to get past, I marched into Boston with my Yankees cap and made no apologies. That weekend, as I searched for an apartment and begged God to have mercy on me, the Big Umpire Upstairs did me one better: He showed me the way to be a Yankees fan in Boston. In short, He gave me the Cranky Yankee Fan 10 Commandments - rules I've lived (in Boston) by ever since.
[For more, check back later this week. You can also follow CYF's RSS, Tweets (@jay_zo) or Facebook page. In the meantime, check out WFAN's Yankees Commandments. And I'll show some love to Sox fans with these rules for Yankees fans.]

* During the cities' second match-up ever, Dave Fultz, an outfielder for the Highlanders, grounded to first and barreled through Pilgrims' pitcher George Winter as he ran to cover the bag. With a crack of bodies colliding, Winter sprawled to the ground, and Fultz, no worse off, shouted towards the Boston dugout to get the pitcher back to the mound or get him the hell off the field.

New York won 6-1 that day, and, as Mike Vaccaro writes in one of the best rivalry books, Emperors and Idiots, "The rivalry's first blood had been drawn, and it had been bad, and it would stay that way" (xiv).
You can read about the teams' histories: Yankees. Red Sox.