On Monday, Forbes released this list of the best fans in all of sports. Sixteen teams across the Big Four sports in the US (baseball, basketball, football and, somehow, hockey) made the list, with the Yankees faithful finishing a disappointing 14th and Red Sox Nation landing the top spot.

I'm here to tell you: this wasn't a level playing field. One major characteristic each makes a comparison of Sox and Yanks fans anything but apples to apples. 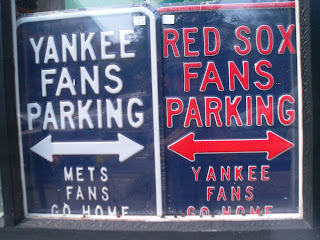 (Source)
First, start with the way these teams are viewed by their fans.
The teams in the rankings essentially fall into two categories. The much larger group is, predictably, franchises who win or have historically won, resulting in passionate fans because, hey, everybody loves a winner. In order of titles, this half is comprised of the Yanks (27), Canadiens (23), Celtics (17), Lakers (16), Red Wings (11), St. Louis Cardinals (10), Steelers (6), Cowboys (5), Spurs (4), Penguins (3), Patriots (3), and Colts (2).
In the other half are teams that are undeniably non-winners but whose fans are diehard, wearing team logos like a badge of honor. These are the Blackhawks, Phillies and Cavs. (You could make the case for the Phillies inching their way to the top group, but it seems too soon to move them over.)
Still missing from either group are those Red Sox fans. That's because they're in the unique position of balancing both sides. The 1918-2004 stretch promoted diehard fans who grew close to the team through the suffering, while the recent stretch could plant them among the winners circle.
The result is an unprecedented group of fans in a top-three market.
Second, the Sox fans don't have a choice.
This is a bit simpler to understand: put simply, the Red Sox are the only baseball team in their very large market, and the city is full of people who care.
In the Forbes list, only the Lakers and Yankees have to contend with fans that have options in the same sport and city (Clippers and Mets). Neither fan base makes the top 10 (the Lakers are 12), and neither could ever hope to make it. Both LA and New York are full of countless fans who can choose other teams in a given sport, meaning the Lakers and Yankees don't get that unified feeling across their markets the way Boston (and most of New England) does.


On top of that, factor in the millions of people in these two cities who either aren't sports fans or are transplanted fans of other teams, and the diversity of LA and New York work against them heavily in the Forbes list.
Given all of this, it's easy to see how the Sox fan base ranks ahead of Yanks fans in a runaway.
Am I conceding here that Boston fans are better then those in New York? Absolutely not. They're just two completely different beasts which can't be compared under the Forbes standards. That's all I'm saying.
(And that Yanks fans are clearly better...)