Okay, so the Sox aren't projected to be a terrible team, per se. But by Yankees and Red Sox standards, would finishing third in the division qualify as a major disappointment? In a word, yes. In two words, hell yes.


And in a word Homer Simpson made up, unpossible! 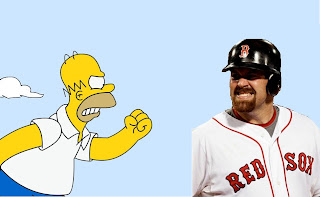 It's worth noting in today's age of infinite metrics in sports (a topic for another post) that  a mathematician has calculated the final standings for each division. He projects the Sox to finish just behind the Rays in the AL East, in third place and out of the playoffs.


This is notable for three reasons. First, it can't sit well with Sox Nation to hear that, especially given that Theo Epstein loves his baseball data to make decisions (Mike Cameron, Adrian Beltre, Marco Scutaro -- all prime examples).


Second, this mathematician is actually accurate with his predictive formula. He's beaten the odds in SIX of eight seasons (and yet somehow he hasn't exploded onto the gambling scene?).


And third, his method could and should be used by the MLB if it continues to prove itself. It'd be a great asset to Bud Selig's panel of experts as they discuss options to level the playing field. They've talked about overhauling divisions by allowing teams to float across them, all in the hope of giving everyone a fair chance at winning -- why not use this predictive formula to help?


Here's some more goodness from today from around the rivalry: