Of all the things complete strangers can do to make a Yanks or Sox fan despise them, the hierarchy looks something like this:

1. Physically or emotionally wound a loved one.
2. Sign with the Sox or Yanks.
Don't believe me? Let's try a mental exercise.
I want you to picture your favorite Boston or New York player in uniform: heroic, radiant in that white and red or proud in those pinstripes, ready to do battle for the good guys.
Now, picture them wearing the other jersey. Envision Derek Jeter with two red stripes down his chest. Picture Big Papi stomping to the plate in Yanks gear. If you can resist the overwhelming urge to claw at your temples with a rake, imagine that player wearing that jersey against your team...18 teams a year.
Horrifying, right? Your stomach does somersaults. Quick, here's a picture of Heidi Klum to make you feel better.. 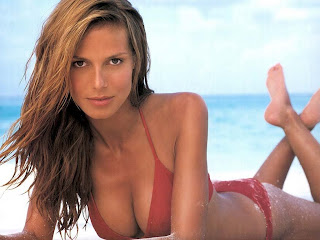 That was close. Anyways, the jersey remains the single most transformative piece of the Red Sox-Yankees rivalry -- you need look no further than Johnny Damon, who can only now wear both World Series rings he won (one with each team) but who was hated by each side at one point and loved by the other, simply because of his jersey.
Players about whom you have no opinion (or even a favorable one) become instant enemies with the letters across their chest. Sorry, Mike Cameron -- I'm sure you're a nice guy, but you're now one of the 25 most evil men in America to millions of people.)
Nothing is worse, however, than a player who changes sides. David Cone and David Wells come to mind as Yankees who "crossed over".  Eric Hinske and Damon won rings with both teams, while neither side will ever forget Boston fan favorite Wade Boggs and his epic ride around Yankee Stadium on a police horse after winning as a Bomber.
We'll refer to switching sides -- perhaps the ultimate rivalry sin -- as the Doc Adkins. Doc was a pitcher who began with Boston in 1902 and switched sides the next season, becoming the first known player to change jerseys.
I'll leave you with this: there is one player in the history of baseball who, though he played for one side (Boston), can incur no consistent hatred. No matter how red his Sox uniform glowed, a Yankees fan's blood simply won't boil. That player.....is Dick Pole.

Yankees/Red Sox Rivalry Commandments
1. Thou shalt choose a side. Forever.
2. Thou shalt not accept bandwagon fans.
3. I am your announcer. You shall have no other announcers before me.
4. Honor thy baseball forefathers.
5. Keep holy Opening Day.