The Yankees and Red Sox: We're Not So Different 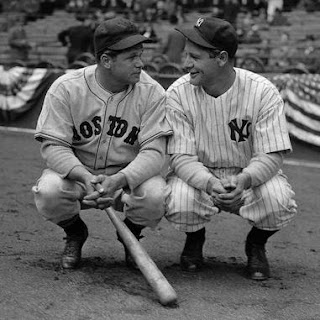 There’s a line that must be repeated in hundreds of movies. Until recently, I dismissed it as nonsense. You know it’s coming every time too: the villain turns to the hero, swirling a glass of scotch, gazing over him as he sits tied up, helpless.
The villain smirks.
“You know…we’re not so different, you and I.”
Your reaction is the same every time. You immediately dismiss the villain.
But take a closer look. Set aside your emotion and your bias.
Take a closer look, and you’ll realize the truth. Darth Vader is Luke’s father. Zeus’s brother resides in the underworld. And the Yankees and Red Sox are, unquestionably, alike.
The Yanks and Sox have a rivalry that’s long been portrayed as light vs. dark, good vs. evil. (In 2002, the Red Sox President Larry Lucchino even went so far as to call the Yankees the "Evil Empire" in an interview with the New York Times.)
Ah, but take a closer look. The similarities are striking: shrewd front offices, big markets, northeast locations but national (and international) presence, revered history, and logos that have moved past representing a team to become fashion statements.
Then there's the payroll, that giant stake most people try to drive between the Yankees Universe and Red Sox Nation. Again I say, take a closer look.
World Series Champs: Most Expensive Payrolls
2009 New York Yankees - $201M
2007 Boston Red Sox - $135M
2004 Boston Red Sox - $125M
2000 New York Yankees - $113M
2008 Philadelphia Phillies - $98M
1999 New York Yankees - $92M
Until 2009, the Red Sox were first and second in the list of most expensive teams to win a title.
Now, part of what's happening here is inflation. Part of it is due to the rising salary of athletes and the greed of agents. But another part is the winning. There's no more of that old-generation Sox mentality of waiting for the letdown, staring up at the Yankees, or believing in curses. Boston fans now expect to win, expect the big free agents, expect the midseason trades – because they can and do make these moves and have the resources to do so. Sound familiar?
(Look, if you have a problem with the spending, blame the MLB, not the teams who use their resources – but that's a topic for another day.)
Even Bill Simmons, not an apologist for the Yanks by any stretch and a huge Sox fan to boot, had the following response in this mailbag on ESPN.com:
Q: Everyone outside of New York and Boston thinks Yankees and Red Sox fans are the same exact person living in two different cities. I see no difference at all between the two fan bases. You are both loud, obnoxious, have ridiculous accents, put stupid pressure on your players, spend money to the point it makes the game unfair, spend way too much money on Japanese pitchers and think your city is far superior to everywhere else's. Am I missing something?
--Josh, Tampa, Fla.
SG: Yeah, you're missing the part where we root for teams that win 95-100 games every year and finish 30 games ahead of the Devil Rays. You left that out.
That was written in 2007 -- the year the Sox broke their own record for most expensive payroll to win it all.
While discussing the Daisuke Matsuzaka signing, Simmons writes more bluntly:
They claim they don't want to overspend like the Yankees do, then they blow everyone else out of the water in the Matsuzaka bidding. [...] Back in the day, I liked being the underdog to the Yanks -- they were the ones that broke the bank, we were the ones that played by the rules, and even though we were spending crazy amounts of money, it never really felt that way. Then the Manny contract changed that perception, followed by Schilling (everyone forgets this now, but Boston was one of only two teams that could afford him) and all the ridiculous contracts that followed over the next 3-4 years. Now we're conditionally spending $51.1 million just to bid on a Japanese player. We're no different than the Yankees anymore. We've become what we always despised and resented. It's a little disconcerting.
And yes, I'm positively giddy that Boston has taken this approach. Because as much as I hate to see them win, I love the thought of them waking up, stumbling through the champagne bottles to the mirror and realizing, "We are who we hate!"
But the big irony of this entire situation is that neither side wants to resemble the other, so this leads to all sorts of fabricated differences and arguments among fans.
I'll leave you with a delicious tale that sums this up for me.

In New Haven, there are two nationally known pizza places: Frank Pepe Pizzeria and Sally's Apizza. Both are on the same street. Both are superb and have received celebrity customers (Frank Sinatra and Bill Clinton, among others). Both have clientelle who fervently defend their preferred restaurant, neither side daring to eat at the other establishment. To anyone outside the area, they're two great pizza places. But locals believe there are stark differences.
Yet take a closer look: Pepe's and Sally's were founded and run by the same family.
Guess they're not so different after all.